The main objective of this project is to hopefully learn more about the species in Northern Ireland, though:


As well as the conservation issues above, I chose to study Black-headed Gulls because of their association with human activities.  Their tendency to hang around train stations, car parks, playing fields, etc. (I'm making them sound a bit shifty, aren't I?!), should increase the chances of colour-ringed birds being re-sighted.
﻿ 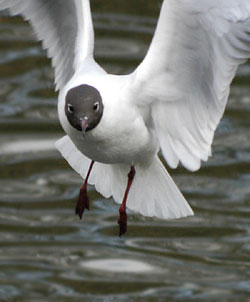