Within a couple of hours of sending my sighting off to the guys in NW England I heard back from Ciaran that blue 2F34 had been ringed at Bowness-on-Windermere just 60 days before on 29 December 2012.

At 219km, it's not a massive movement but it is an interesting one nontheless. 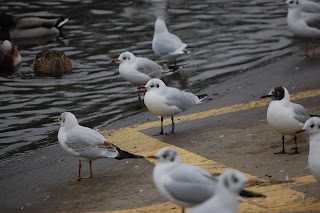 I had to meet a colleague this afternoon to give him some stuff for work and as we had arranged to meet only 5-10 minutes from where I have been doing most of my catching this winter, I nipped round afterwards to see if I could see any of our study birds.

It didn't take long for birds to surround the car and I managed to take a few photos of a couple of the birds we'd ringed there earlier this winter, including 2ABL who was looking fantastic with almost her full breeding plumage.  It was also nice to see that white T35J was still around too. 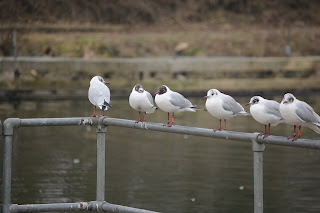 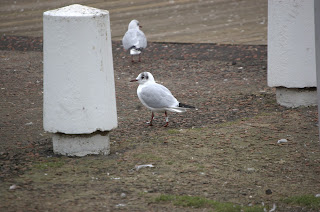 My 14 month-old son was with me and we threw some bread down to keep the marauding mallards and ravenous mutes at bay.  I also managed to catch a gull whilst holding Ru at the same time, but I realised I had left my ringing gear at home, so unfortunately it was in vain!

Just as we were leaving I noticed a bird which had been fitted with a dark colour-ring.  On closer inspection I could see that it was blue 2F34. I could also just about make out the email address at the top of the ring, which told me it was a bird from the NW England Project. 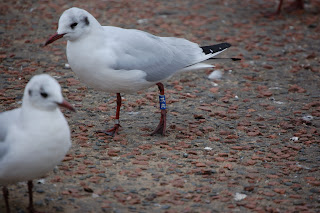 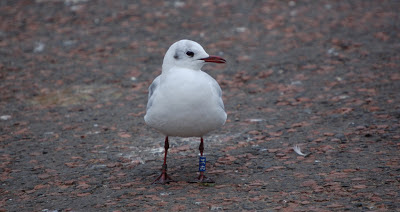 Via the power of Twitter I confirmed my sighting with Kane Brides and this evening I sent off a couple of photos to Kane and Ciaran Hatsell, who coordinates the BHG c-ringing side of their study.

You can check out the Facebook page for the North West Coot and Black-headed Gull Study by clicking here.

I was on the Ards Peninsula on Saturday for work and I called into Ballywalter for a coffee break and a look to see if there were any ringed gulls about.

Although I failed to catch any birds, I did see a black-headed gull with a black colour-ring, P736.


After checking cr-birding, I sent an email off on Sunday morning to Vytautas Pareigis who is the Head of the Bird Ringing Station Juodkrante.  Within a couple of hours I got a response from Vytautas telling me that the bird had been ringed as an adult by him and Frank Majoorat Dumpiai dump, Klaipeda in Lithuania on 03.04.2010.

On my way to work yesterday morning I passed a well known fast-food restaurant and noticed the car park was full of black-headed gulls.

Pulling over I threw some bread out (yes I keep bread in the car, doesn't everyone?!) and was immediately surrounded like a scene from Hitchcock. I managed to catch one new bird, an adult female which was starting to come into breeding plumage.

﻿
As I was making my way home after another hard day at the "office" the golden arches of another branch of Micky D's came into view so I thought I'd try my luck for a second time and within a couple of minutes I had second bird.

The gulls do seem to prefer that particular American delicatessen over the other, finger-licking one, who knows why, perhaps they don't like the Colonel's secret recipe?!
No comments:

The final bird which Lowell got in touch about was another colour-ringed bird, also seen in Coleraine.

T01W was recorded at Christie Park at the end of November and was originally ringed on 9 July 2011 as a first year bird in Mrezezyno, Gryfice, Poland. This means that this bird travelled at least 1410km, but chances are it took a much longer route to get to get here to spend the winter on the River Bann.

Many thanks for Lowell for passing on the information about these ringed birds, it's much appreciated.

Lowell's second winter sighting of a ringed Black-headed Gull was a couple of weeks after the BTO-ringed bird in Portrush, when he recorded a colour-ringed bird J9J2 near Dunne's in Coleraine.

The bird had been ringed as an adult in Ostensjovannet, Oslo only 169 days before on 9 April 2012. The movement of this bird was approximately 1168km.

Lowell Mills got in touch recently with some information on several Black-headed Gulls he'd seen in "oop north" earlier this winter.

The first bird, which Lowell saw was at East Strand in Portrush back in early September. It wasn't colour-ringed but he managed to read and report the number on the metal BTO ring.

He heard back that this bird had been ringed as a nestling on 12 June 2010 at North Esk reservoir in the Scottish Borders making it a movement of 209km.

As of the end of January we have caught and colour-ringed 31 Black-headed Gulls at six sites in Counties Antrim and Down.

Of the 31 birds we've ringed so far 29 have been adults and two have first winter birds.

It's still very early days but we've had 74 re-sightings of 22 individuals and although these have all been from the sites at which they were ringed, it's encouraging that people are seeing the birds and reporting their sightings. 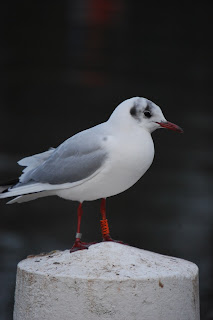 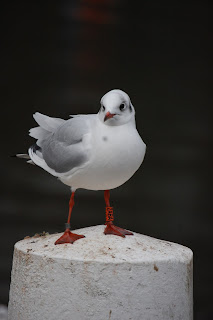 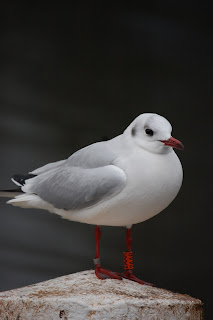 I've also managed to rope Kerry Leonard into helping out.  Kerry secured permission from the local council to ring on their land, so hopefully he'll manage to get some more c-rings fitted to birds in County Down soon.