Kevin and I headed up to our site again on Friday morning in the hope that we might catch a few more gulls to colour-ring.

As always when I first arrive, I had a quick scan of the gull flock to check for colour-rings and immediately saw T35J, the Polish ringed bird, originally from Lithuania (see here) as well as 2AAL, 2AAN and 2AAR.


We managed to catch and ring four new birds which were fitted with colour-rings 2AAV, 2AAX, 2ABA and 2ABB.

As well as the three re-sightings above, we also recorded 2AAT, 2AAP, 2AAD, 2AAA, 2AAK and 2AAS, so it was a successful enough morning.

The morning got even better when, just as we were about to leave, I managed to catch T35J and this gave us an opportunity to confirm the metal ring number and is my first foreign control.

A bit of festive ringing

I spent the morning at my catching site last Friday (21 December) and had a bit of success, catching seven new adult birds (three females and four males).

I was very happy with this total as about 45 minutes of my morning was disturbed by two coach loads of Chinese tourists, a couple of whom spent most of their time trying to get their photographs taken near the birds or running down the marina shouting and waving their hands and scaring the birds off! It did give me a good excuse to go grab a coffee though.

As well as managing to ring seven new birds, I also re-sighted four birds which had been ringed previously, 2AAA, 2ADJ, 2AAJ and 2AAH.

Yesterday I got a couple of text messages from my ringing trainer, Neville, and a local bird photographer, Bill Guiller, who both told me a photo of one of my study birds had been posted on a Facebook page for Northern Irish bird photographers (see here).

I had a quick look and sure enough, there was an image of 2AAT.  This was a male bird and the last one I caught and ringed on 21 December.

Bill passed on my details to Chris Smith, the observer, who has kindly sent me a copy of his photo which he as allowed me to use here.

I recieved my first resighting report at the weekend, when Nigel Ireland got in touch to say he'd seen several of my colour-ringed gulls (2AAD, 2AAH and 2AAJ) at Loughshore in Antrim.  Almost feels like a proper project now!

A couple of fantastic photos from Ian Dickey also found their way into my inbox over the weekend. One of the photos shows 2AAJ, one of the birds Nigel saw on Sunday.

Thanks to Nigel for the sighting report and to Ian for letting me use his photographs.

This is the first time I've tried uploading a post via the Blogger app, so I hope it works!

You'll have to excuse the quality but this photo was taken through my telescope with my phone.

It shows 2AAJ shortly after being ringed. The bird just flew a short distance, had a quick preen and then went over for a snooze. 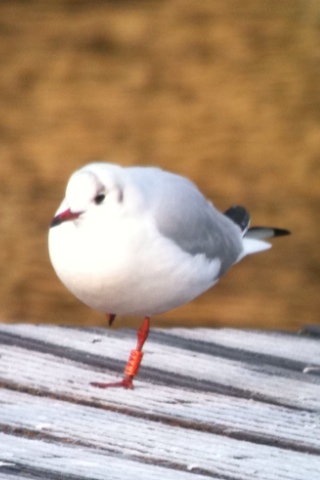 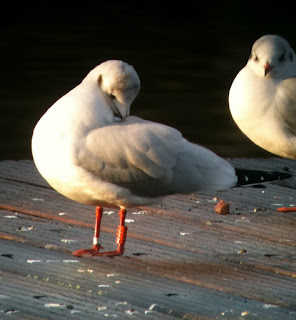 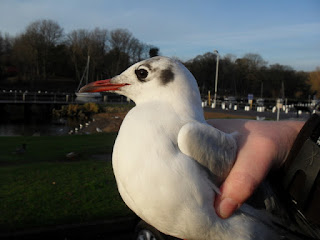 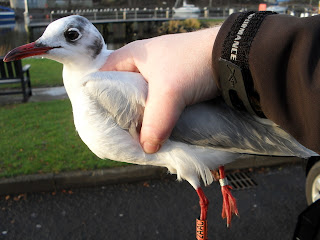