Keep an eye on those birds....

With temperatures dropping and the weather turning decidedly wintery, birds are on the move. It’s worth while checking flocks of wintering gulls for colour-ringed birds as you never know what you might be lucky enough to find.
There have been reports of Polish and Norwegian ringed birds in north Antrim and Kane Brides told me of a Cumbrian ringed bird being recorded in Co. Wexford yesterday.
No comments:

After speaking to Bob Harris at the BTO NI Birdwatchers' Conference last weekend, who told me about a fairly simple way of catching Black-headed Gulls for ringing using a box and some string, Kevin and I headed out this week with the first prototype of our trap.

Unfortunately the birds were extremely wary (rightly so!) and none were tempted by the delicacies inside - Asda own-brand white pan loaf.

After a while sitting around and keeping the birds interested by throwing small pieces of bread out the window, I tried catching a bird by hand from the car window. 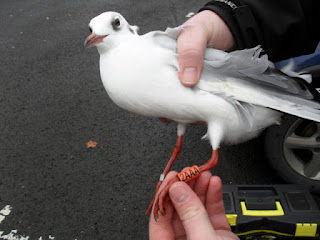 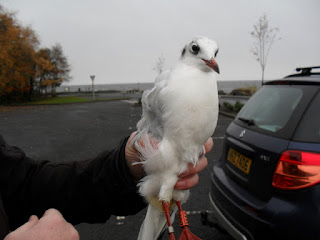 Hopefully they are the first of many.... 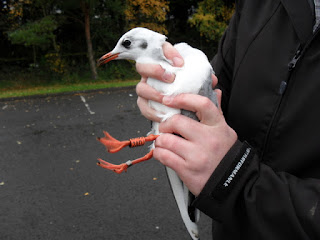 On Saturday I attended the BTO Ireland Birdwatchers' Conference at Oxford Island, on the shores of Lough Neagh.  This year’s conference was entitled, “Movement and Change: An update on some bird research and bird surveying in Ireland”.

A fantastic turnout of over 180 delegates listened to a wide range of great speakers, including Chris Murphy who spoke about the recent additions of Great-spotted Woodpecker and Little Egret to the list of breeding birds in NI, followed by Graham Appleton from BTO who highlighted some distressing declines which have been flagged up by the recent Atlas, including Curlew, Woodcock and Irish Sea Common Terns.

John O’Halloran from UCC showed that evidence has indicated that a lengthening season in grass growth as resulted in Whooper Swans now arriving earlier in autumn and departing earlier in spring. I also learned that the first person ever to fit a colour-ring to a bird was a COLOURBLIND Irishman named JP Burkitt in the 1920s – brilliant!  Without Burkitt, I may not be undertaking my colour-ringing project of Black-headed Gulls, who knows?!

Eimear Rooney updated everyone on her fantastic PhD study into Buzzard ecology in north-east Ireland, estimating that there are 2128 breeding pairs on the island of Ireland and that, unsurprisingly, the main prey items in their diet are corvids and rabbits. She also showed some interesting, if contrasting, movements of wing-tagged birds, with some travelling over 100km and others staying close to the nest, travelling less than 0.5km.  Eimear’s Buzzards are tagged with a yellow wing-tag on the right wing and an orange or blue tag on the left, depending on the year it was born.
Tony Murray from NPWS spoke about trials and tribulations of managing Lady’s Island Lake in Wexford for breeding terns and a colony of over 1600 pairs of Black-headed Gulls, in particular how managing the water levels correctly can prove the difference between success or complete and utter devastation.  This summer while helping with nest counts on RSPB Larne Lough Islands, I was lucky enough to recover a dead adult Sandwich Tern which had originally been ringed at Lady’s Island Lake in 1998 as a chick.

Phil Atkinson from BTO told us about some of the magnificent tracking projects currently being undertaken by BTO, including tracking Swifts and the now famous Cuckoos!  I was particularly interested in the Cuckoo project as I got to ring a female Cuckoo which was fitted with a satellite pack as part of this ground-breaking work.  Unfortunately, Idemili as she was named, was recovered near London after being attacked (we don’t know what by) and was subsequently rehabilitated and released without her back-pack.  You can read more about Idemili’s amazing story by clicking here. 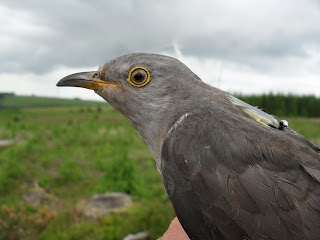 Jenny Gill then told everyone about their work colour-ringing Black-tailed Godwits and some of the amazing results they have found, including where birds over-winter and on which habitats they choose to feed.  Make sure you check any Black-tailed Godwits you see for colour-rings and more importantly...make sure you report your sighting!  You can read about my recent sighting of one of Jenny et al's colour-ringed Blkwits by clicking here.

Kendrew Colhoun enlightened us all of the work looking at that tough little wader, the Purple Sandpiper.  Through tracking individuals, they have found that birds over-wintering on the west coast of Ireland are from Canada and that they can fly non-stop for five days from Greenland to Ireland – amazing for a bird that weighs an average of 70g.

Mary Montague informed the audience of her fascinating work looking at noise pollution and how it affects birdsong. Mary showed that by being exposed to pre-recorded traffic noise, a singing Great Tit will respond with a much shriller song. Absolutely intriguing work.

Finally, Shane Wolsey told everyone about the projects we undertook on Copeland Bird Observatory this year to encourage breeding terns and prospecting Puffins.  That’s all I’m telling you about those two projects because if you want to learn more, you’re going to have to visit this spectacular island.

I'm not normally one to twitch, but this afternoon I headed up the Antrim Coast to have a look for the Surf Scoter which has been around since last Wednesday.

It didn't take long to locate the North American visitor, it was the only bird in the small, picturesque harbour at Carnlough.


The journey was definitely worth it when I got speaking to a local birdwatcher who told me that he had seen a colour-ringed Little Egret on Larne Lough back in August.  Having literally just gotten off the phone to Tony Cross in Wales, I immediately thought it might’ve been one of Tony’s birds from Bangor, north Wales.

A quick phone call confirmed that it was indeed one of Tony’s birds, and it was born this year – it didn’t waste much time moving north!

﻿ ﻿ On the way home I stopped off at a couple of villages and identified three potential ringing sites where I will attempt ringing when I get a bit of time.

There were a couple of big flocks of Black-headed Gulls, including this metal ringed bird at Glenarm.  Unfortunately I wasn’t able to read the ring as the bird didn’t sit on the railings long enough.  Hopefully though I'll catch this bird at some stage over the winter and slip a nice colour-ring on the other leg!