It's a quiet time of year for Black-headed Gulls, still waiting until young are big enough to ring and no wintering birds to catch, so I headed out to Copeland Bird Observatory yesterday to try and catch some bigger (and meaner!) gulls.

There was a day trip heading out from Donaghadee at 10.30am, so I tagged along and as the group were busy being shown around the facilities on the Island, I got busy setting nest traps in two of the Lesser Black-backed Gull colonies on the Observatory.

The Copelands are home to several thousand pairs of gulls, including this pair of Lesser Black-backs.


Many pairs are still on eggs... 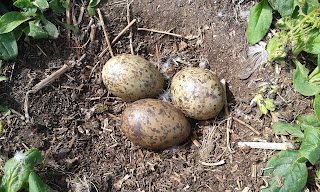 while others are just beginning to hatch... 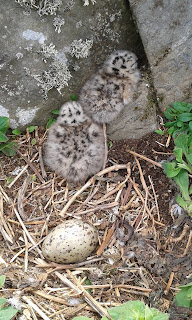 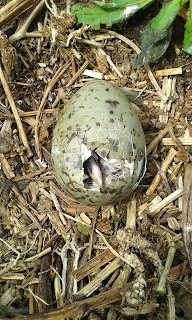 and some have large young, up and running around. Too quick for a photo!

It didn't take long before I managed to catch a couple of birds. Lesser Black-backed Gulls are a very different bird to the whimpy Black-headed Gulls we're used to...these lads can draw blood!


We were only on the Island for a few hours, but eight Lesser Black-backs were caught and ringed. Perhaps potential for a new colour-ringing project sometime...

I also was successful in catching a male Herring Gull which, as well as being ringed with a traditional BTO ring, was also fitted with a colour-ring as part of an ongoing project on CBO. Last year, a total of 16 Herring Gulls were colour-ringed on the Copelands and to date, we've had one re-sighting (see here).


Please keep an eye out for Herring Gulls fitted with yellow rings ending in "W" and report them via the BTO.
No comments:

Way back in November 2013 I recorded a first-winter Black-headed Gull with a metal ring at Newcastle, Co. Down (see here). 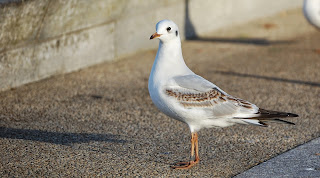 I was able to piece together the number via photographs and could make out the word "Finland". 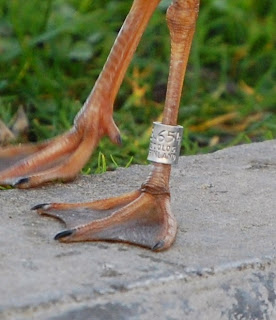 For whatever reason, I only got feedback this week which told me that it had been ringed at Salo in Finland as a chick in June 2013. 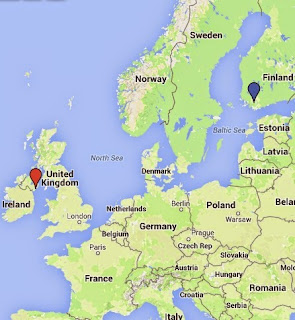 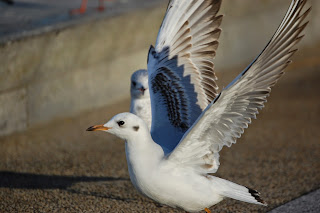 I thought it would be interesting to have a post about a couple of colour-ringing projects co-ordinated by a ringer based less than 30 miles away...just on the other side of the North Channel!

Hi, I’m Gillian Dinsmore – I am a bird ringer, nest recorder, blogger and fellow gull addict from just across the sea…in Galloway! I’ve been asked to write a blog post for this fantastic blog as I have a couple of similar projects running here in South West Scotland.


As you may have noticed from my profile picture, I am quite keen on waterfowl. I currently run projects on Black-headed Gull, Common Gull and Coot, with past projects on Reed Warbler, Canada Geese and Tree Sparrow. In this post I would like to introduce you to both my Black-headed and breeding Common Gull studies.


I developed my love of all things gulls whilst working down in Manchester for the WWT as a Tree Sparrow monitoring assistant. Whilst living in Manchester I joined the Loganhurst Ringing Group which had a number of existing projects on Mute Swan, Coot and Black-headed gull. It was through working with the group that I became fascinated with colour ringing projects and gulls. The group often receives reports of ringed Black-headed gulls from countries such as Norway and Sweden as well as from elsewhere in the UK, it was this that lead to my initial interest in the species. A few Black-headed gulls are also regularly reported from Stranraer, my hometown! Due to my growing fascination with the group’s projects I soon decided to start my own on Coot and Black-headed Gull.

My Scottish Black-headed gull project aims to investigate and determine the winter and breeding site fidelity of the species as well as to gain a better understanding of their migratory behaviour and longevity. I colour ring birds in winter at a number of sites across Scotland and in summer I nest monitor and colour ring at my local breeding colony near Stranraer. 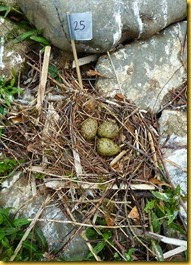 As the project is in its early years, we are still working on building up the number of colour marked birds in the population but so far have had some interesting recoveries from within the UK.

We had one interesting juvenile Black-headed gull, whom I ringed at Linlithgow, follow me home to Stranraer just 5 days after ringing. We also had a one BHG reported from Seahouses, Northumberland – the same site in which a Northern Ireland BHG had also been observed. 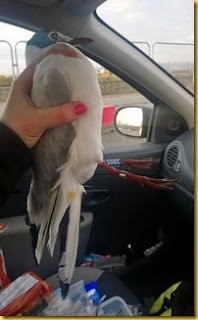 As well as my Black-headed gull and Coot colour ring projects I have started a new project this year based upon the Scottish breeding Common Gull. The Common Gull is an amber listed species and can be found breeding in upland areas of Northern Britain. My study aims to investigate breeding and winter site fidelity of both adults and juveniles, annual pairings of breeding adults and the migratory patterns of both juveniles and breeding adults. 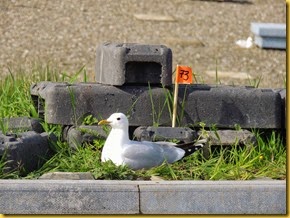 I will seek to gain a better understanding of the species by colour ringing both chicks and adults at a number of breeding colonies in Scotland (mainly Galloway) and by nest monitoring a local colony in Wigtownshire. As little is known of the behaviour of UK bred Common Gull and that of sub-adults (before they breed at 3 years old), this study should produce some very interesting results and therefore be able to shed some more light on this charismatic and understudied species. 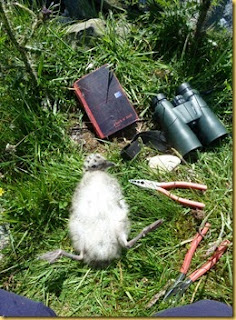 As this is the first year of the project, and there are significant start-up costs, I have followed in the path of the NI BHG study and started a Kickstarter page. I would really appreciate it if you took the time to look at my project page on Kickstarter, to share it and donate if you can. There is also a lot more information on the Common gull and the study on the Kickstarter site. 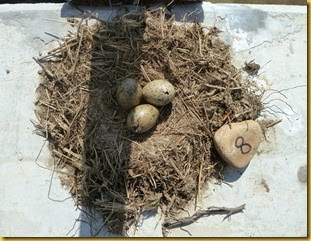 Keep an eye out!

Please keep your eyes peeled for colour ringed birds. My projects colours / combinations are as follows and can all be reported to crbirds’@’hotmail.com 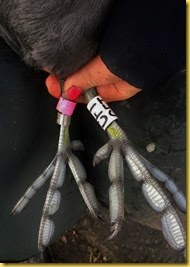 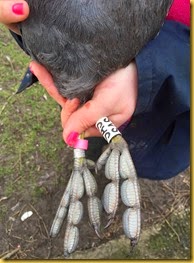 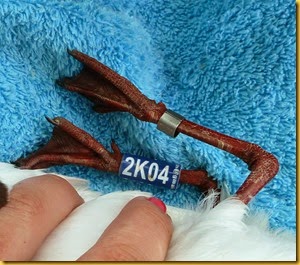 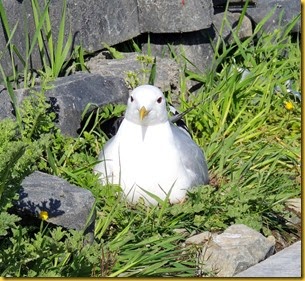 Thank you for taking the time to read my wee post and I hope you found it interesting. If you would like to follow the progress of any of my projects or adventures then you can follow me via the blog or Twitter.

A few weeks ago I visited our main winter catching site to see if many birds were about, now that the breeding season is in full swing.

There weren't many Black-headed Gulls present and those that were there were showing no interest in the bread-toting toddlers feeding the ducks, something which is unheard of during the winter! Instead they were busily gorging themselves on Lough Neagh flies which were emerging. 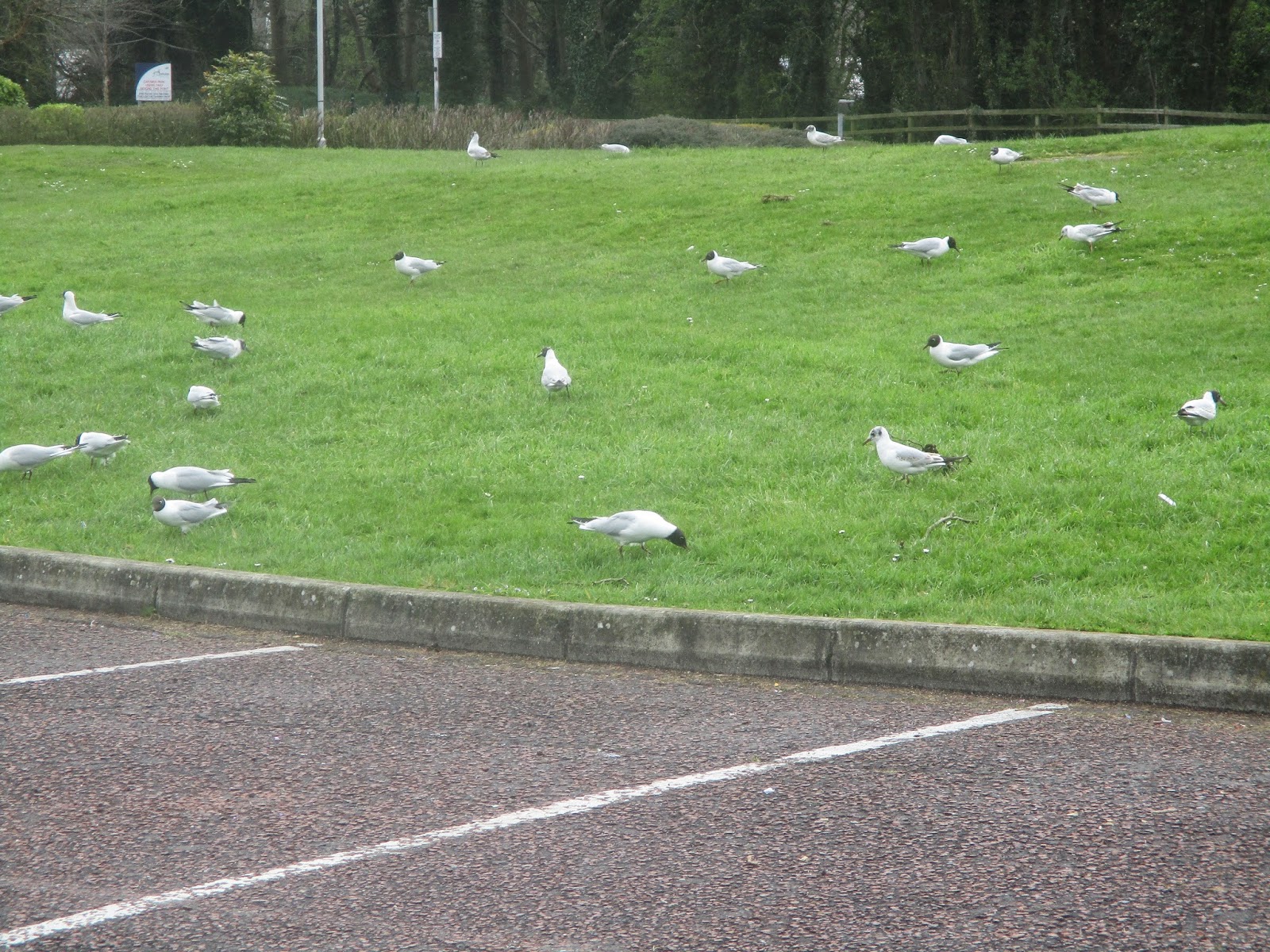 Lough Neagh flies are a non-biting midge which, while harmless, can be overwhelming when they descend in huge numbers at certain periods during the spring and summer. Thankfully, they weren't out in force when we visited, but there were still some fairly dense swarms about. 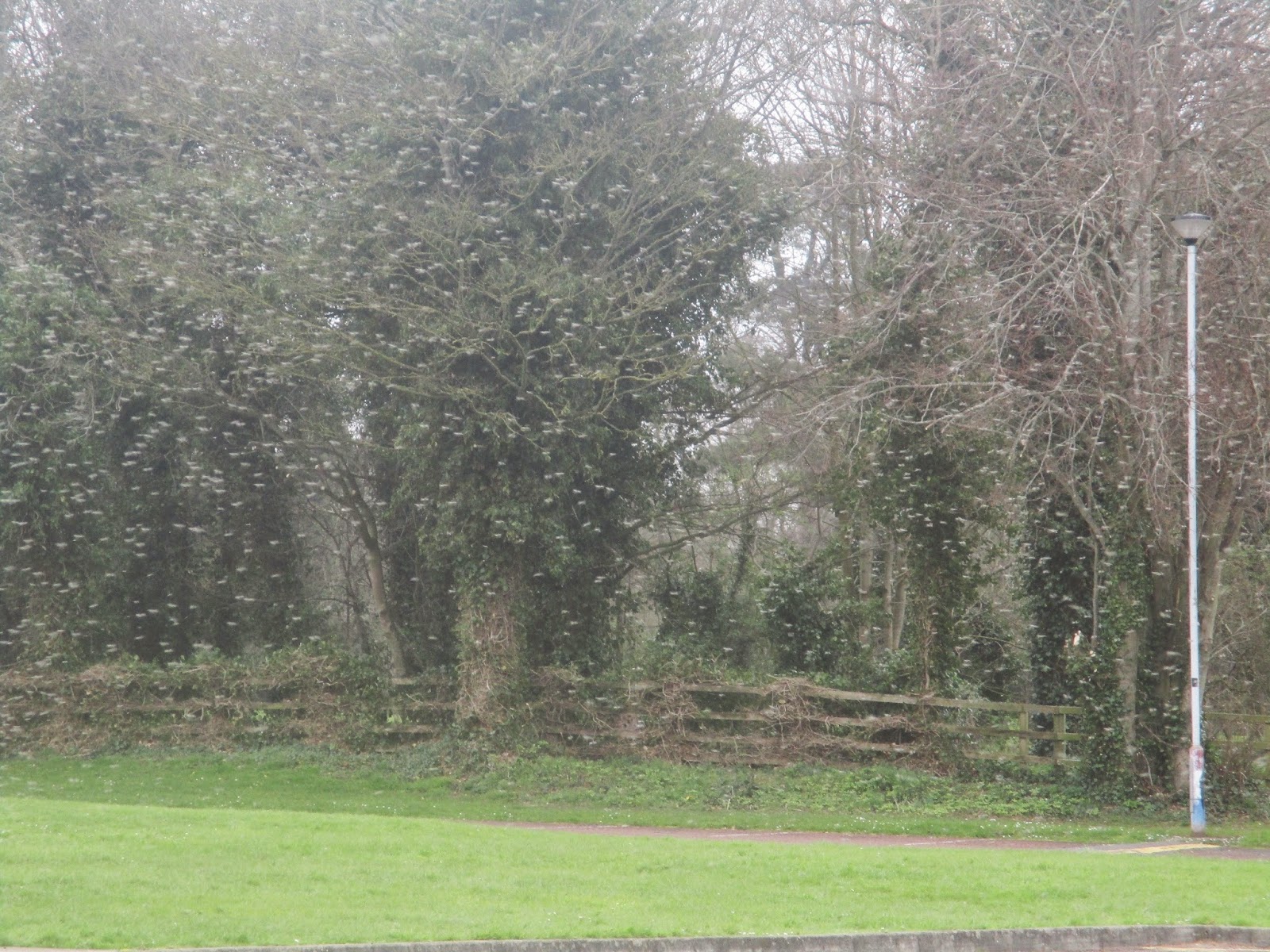 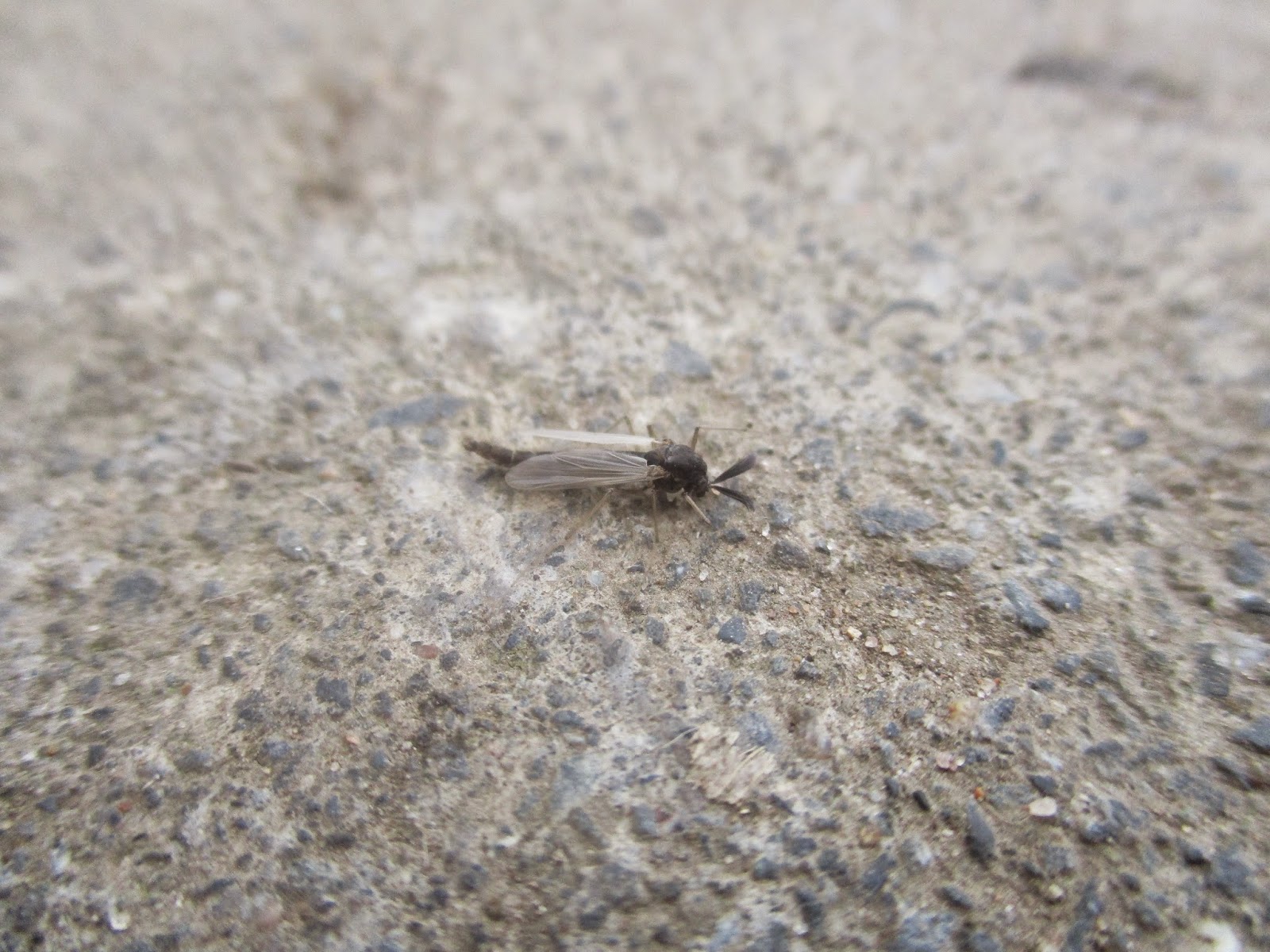 As uncomfortable as they can make life for visitors to Lough Neagh at times, the flies are a vital food supply for breeding birds in summer and support tens of thousands of birds breeding and feeding on the Lough.
No comments:

Check out the blog of another group of local ringers, Causeway Coast Ringing Group:

Way back in August, a colour-ringed Black-headed Gull was reported to me by Cameron Moore at Whitehead in Co. Antrim.

Cameron told me it was ZXCN and, after checking cr-birding.org, I reported the sighting to the appropriate project contact. I heard back that they hadn't used this code and it got me thinking, could the "Z" be a "2"?

I meant to follow up with this, but I forgot and it was only a couple of months later while deleting old emails, I remembered about it.

I contacted Cameron and he had thankfully taken a photo. It took a couple of months longer (and a bit of pestering on my part!) for him to send me the photo, but he has now sent it through and I'm delighted to confirm that it is 2XCN.

2XCN is a bird ringed in NE Scotland by Grampian Ringing Group. It was through my involvement with GRG's gull projects via Tay Ringing Group while living in Scotland that I got interested in colour-ringing gulls....so this whole thing is their fault!

Ringed as a juvenile in September 2012 on the Ythan Estuary, it was recorded twice in October 2012 at Seaton Burn in Lothian. Cameron's re-sighting in August 2014 is the first record since.

Many thanks to Cameron for the report and photo and to Calum in Grampian for the information.
No comments:

I got word from Eddie Fritze, the observer who reported 2BPP at Riga in Latvia, that he had received a life history on the bird from Juris Kaubiernis of the Latvian Ringing Centre.

The bird was ringed as a nestling at Masenu Lake near Riga in Latvia in June 2005. It wasn't seen again until May 2009 when it was recorded at Getlini by Eddie!

In October 2011, it was recorded at Maryport in Cumbria, England and that was it until October 2014, when it was controlled at Kinnego, Lough Neagh and a colour-ring added. It was re-sighted at Lough Neagh twice during the winter, before Eddie spotted it back at Getlini last month.

Thank you to Eddie for passing on the information. Hopefully the addition of a colour-ring will generate some more information on this individuals migration route.
No comments: