Where do our young birds go to breed?

This is one of the main objectives of our colour-ringing study, so as you can imagine at this time of year, we have been extremely busy trying to visit our study colonies to colour-ring a sample of the young. This enables us to monitor the movements of birds as they disperse from the colony, as well as seeing if they return to their natal site to breed once they mature.

Earlier this month, Gary recorded a bird at Antrim which he had never seen before, 2ALH. The behaviour of the bird led Gary to conclude that it is breeding at the colony on the old torpedo platform in Lough Neagh just offshore from Antrim.

Upon checking the database, I was surprised to learn that this bird had been ringed as a chick on Mew Island, Copelands in June 2013. You can see a report of that visit here.

It had been recorded four times since ringing, three times at Ward Park in Bangor and once at Ballyholme in October 2015.

This highlights the advantage of ringing young birds at colonies - we know where this bird was born, when and now, where it is breeding! It's interesting to note that this bird has moved in-land to breed, I would have assumed that a bird born on the Copelands would move to another marine colony nearby, perhaps in Belfast Lough, Strangford or Larne Lough.
No comments:

Approaching the end of June, the breeding season is starting to slow down, with young birds already fledging and dispersing from colonies....so please keep an eye out for colour-ringed birds and report your sightings.

While there still might be an opportunity to make a late visit or two to our study colonies, I've finally gotten time to draw breath and reflect on the season so far.

The main development this season was the addition of a new colony, at Inch Lake, Lough Swilly in Co. Donegal. 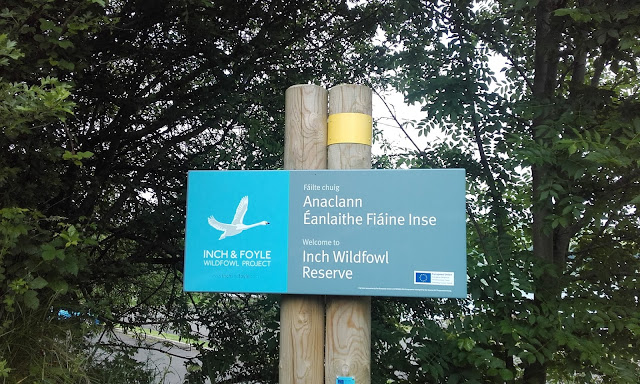 Inch Lake is a brackish lagoon which was created by the development of the Farland and Inch embankments during the mid-19th century, separating it from the tidal waters of Lough Swilly.

Within Inch Lake there is a small islet which, during the breeding season, is home to a large colony of Sandwich Terns and Black-headed Gulls, as well as a few pairs of Tufted Ducks, Mute Swans, Mallard and Common Terns.

Sandwich Terns have been studied at Inch for over 30 years and this year we were fortunate enough to be invited along to ring Black-headed Gulls during the visits to study the terns.

Over the three visits a total of 122 birds were colour-ringed, with an additional 39 fitted with metal rings only.

It is fantastic to add this colony to our study as this will enable us to track movement of young birds from a colony right on the edge of the species' European range. 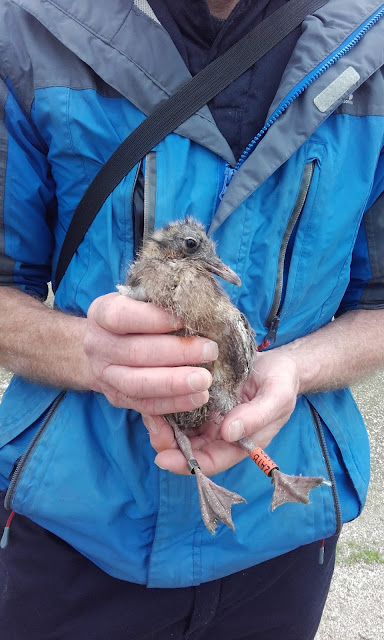 Many thanks to Causeway Coast Ringing Group and NPWS for inviting us along and dealing with the logistics of organising the trips. 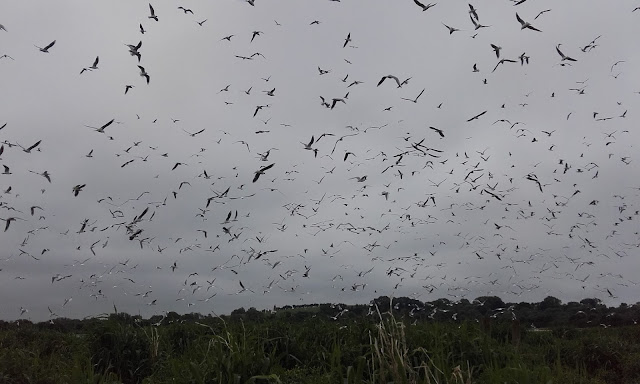 Worrying news has emerged over the past couple of days.

A large diesel spill has occurred along a stretch of the County Antrim coastline which is home to several key seabird breeding colonies including The Gobbins, Muck Island and Larne Lough, which includes one of our Black-headed Gull study colonies.


The story, including photographs, can be viewed by following the links below:

While an incident like this would be awful at any time of year, it may be particularly devastating at this time of year as auks, terns, gulls, cormorants and shags use the area affected for feeding. In addition, the weather has been relatively calm recently, which is slowing the dispersal of the spill.

Members of the East Antrim Boat Club have already reported a number of dead birds along the coastline.

Fingers crossed the impact upon the birds at these vitally important colonies will be minimal.
No comments:

In my last blog post back in January before my impromptu break in blogging, I reported catching and colour-ringing a German ringed bird at Carrickfergus in County Antrim (see here).

I signed off with saying it would hopefully increase the number of reports of the bird, perhaps back in Germany.

Well, it appears to have worked....in April we received a report that the bird had indeed been seen, not in Germany but in Poland.

The bird was re-sighted at Swinoujscie near the German border at end of March, a great result and once again highlights the benefits of colour-ringing.

This was the second sighting since the bird was colour-ringed, having been recorded at Carrick Harbour in late February by Cameron Moore.
No comments:

Indeed it has! The lack of posts on the blog doesn't mean the project hasn't been continuing, I've just been extremely lazy in keeping it updated. Apologies, normal service will be resumed soon.

There have been some exciting sightings which I will post about in the future.

In the meantime, here's a photo taken by Suzanne Belshaw of 2ABK looking well in her breeding plumage.