On the same day that one of our study birds was recorded in southern England (see here), a bird which had made the journey in the opposite direction was photographed by Neal Warnock at Carnlough, Co. Antrim.


2PAC  was ringed as an adult by the North Thames Gull Group at Pitsea landfill site in Essex on 27th February 2016 and this is the first resighting of it since.

The bird has since been re-sighted by Gary and he managed to get a closer photo.


I wonder if this is a continental bird which has regularly wintered in Co. Antrim and was trapped on it's return journey east. Hopefully further re-sightings of the bird will tell us.

Many thanks to Neal and Gary for their photos and Paul Roper at NTGG for the information.
No comments:

A couple of weeks back, I put up a short post about visiting sites around Carrickfergus (see here). The visit was in the hope of seeing the German-ringed bird we caught and colour-ringed last winter (see here), which was subsequently recorded in Poland (see here).

Well, as usual, Gary has beaten me to it!

I was delighted when he sent an email on Saturday evening with the photo below attached,  2ANX  is back.


Many thanks to Gary for the photo and his efforts in re-sighting so many ringed birds here.
No comments:

Where have you been?!

We have received a report from the BTO that one of our birds was recorded in Norfolk last week.

2BAN  was ringed as a chick on RSPB Blue Circle Island in 2013 and hasn't been seen since, until it was seen at Ormesby Broad near Great Yarmouth.


I do wonder where these birds go that they can manage to go unrecorded for several years before turning up. Gary had another recent example when he recorded one of Shane's colour-ringed Common Gulls at Whitehead, just 8 miles from the Copelands where it was ringed over six years ago.

It would be fantastic at some stage to tag birds to see where exactly they go on their travels. I'm sure we'd learn so much we don't know.
No comments:

First new bird of the winter caught and ringed

After a fairly quiet winter last year catching wise, we are hoping to add some wintering birds to our study in an effort to establish where our wintering birds have originated.

On Sunday morning, a couple of us met up at a site where we have had some success catching birds in the past. Generally these sites need to be places where the birds are used to be being fed by people and have lost some of their fear. As such, sites tend to be duck ponds or fast-food car parks!

Unfortunately, birds appeared wary and we only managed to catch and ring one new bird, a first-winter bird. While we at least know the age of this bird, who knows where it has come from.

In addition to this new study bird, there were 20 re-sightings of colour-ringed birds, including the Lithuanian BHG with a Polish colour-ring that we first recorded at Antrim in October 2012 (see here).

Perhaps it was the fact it has been slightly milder recently, but we will keep trying and hopefully add a few more individuals in coming months.
No comments:

I've heard of an influx of white-winged gulls but never "white-ringed" gulls, however, this is what appears to have happened recently, with another white colour-ringed bird reported! This time at Lurgan Park in Co. Armagh.

Another returning bird, first recorded here by Stephen Hewitt back in 2013, J4P4 was ringed as a chick at Stanga, Råde, Østfold in 2006. It wasn't recorded again until it was recaptured in 2011 and the colour-ring added.

Suzanne photographed the bird back at Lurgan a couple of days ago where it probably also spent last winter, but went undetected.

Frustratingly for Suzanne, there was another ringed bird present but unfortunately it wasn't colour-ringed and she was unable to read the number on the metal ring.

Thanks to the colour-ring, and the fantastic Norwegian colour-ringed birds website; we know where this bird was born (blue below), where it now breeds (red below) and where it winters (Lurgan Park!).

Many thanks to Suzanne for the report and her photos.

Back in December 2013, I recorded a Norwegian colour-ringed Black-headed Gull at Dargan, Belfast Lough (see here).

There had been no further sightings during the winter, until Gary photographed it last week. It was back at Dargan, where I had seen it three years ago. 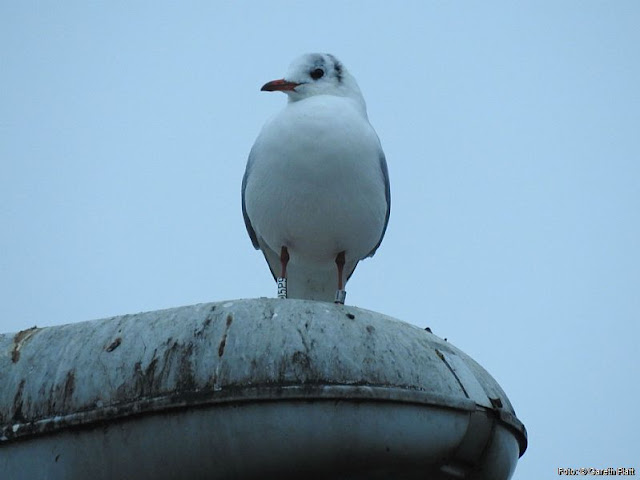 While this is a great result to get, it's frustrating for me as I regularly check the flock of gulls here and haven't managed to see it since my record in 2013! Must get back there soon....
No comments:

A colour-ringed adult has been photographed a couple of times recently at Whitehead, Co. Antrim. The first, from Cameron Moore, was taken on 26th November and this was quickly followed up by a sighting from Gary two days later.

Cameron reported his sighting via Graham McElwaine, the re-sightings co-ordinator for the Irish Brent Goose Research Group, who passed it onto Kjeld Tommy Pedersen in Denmark and was kind enough to copy us into the email.

Kjeld responded with the life-history which told us this bird had been ringed as an adult male in March 2015 at Gentofte, eastern Denmark.

This is the second Danish colour-ringed Black-headed Gull we have recorded here in recent years (see here).

Cameron's sighting was the first report of this bird since ringing. Many thanks to Graham for keeping us "in the loop", to Cameron and Gary for their photos and to Kjeld for the quick response and information.
No comments: