On Tuesday morning, I made my last visit of the season to one of the Black-headed Gull colonies at which I had hoped to ring pulli, when I made my way to the Wildfowl and Wetland's Trust site at Castle Espie on the shores of Strangford Lough.

It's very late in the year now, but we gave it a go as the colony here had been late in settling and we hoped that one or two chicks had managed to survive predation by LBBG and mink.

Thankfully there appeared to be quite a few big chicks around, but frustratingly, most of them were already able to fly, thus evading capture.  We did, however, catch and ring six new birds near the Crannog, including 2BAD, pictured below. 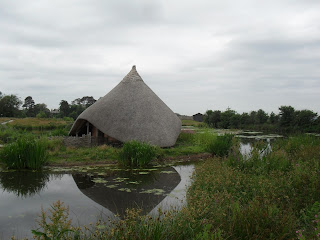 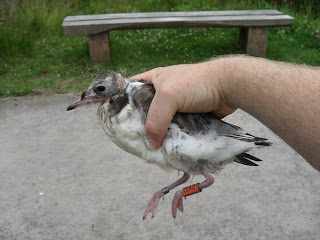 While six might not be a massive number, it does mean that I managed to colour-ring a total of 93 pulli at three of the four colonies I had hoped to visit this season. It also brings to an end the first breeding season of the Northern Ireland Black-headed Gull Colour-ringing Project!


The only site where I had hoped to ring but was unable to, was the National Trust islands on Strangford Lough.  Unfortunately, the National Trust wardens reported that the BHG colonies on the Lough have had a very bad year in 2013, with most colonies collapsing and only one island holding any sort of reasonable number of birds.

Another National Trust island, Cockle Island at Groomsport, did seem to do alright this year.  The colony here is usually around 400 or so breeding pairs, but visiting Cockle Island to colour-ring the young BHG was not really an option though as the disturbance caused to other species could not be justified.

Incidentally, a joint project by BTO, National Trust and North Down Council means there is an option to view a live camera feed from Cockle Island on the BTO website:

Elsewhere along the coast in Counties Antrim and Down, it has been a mixed season for BHG with the fledging colony on the artificial islands at RSPB Belfast Lough holding c.300 pairs and the colony on Blue Circle Island once again held strong at around 2000 pairs.

I've already mentioned in a previous post that the new colony on Old Lighthouse Island and increase on Mew Island are most likely down to birds relocating from Big Copeland, where we discovered no evidence of breeding activity this year.

Inland, I don't know how the colonies around Lough Neagh got on this year, but if this image is anything to go by, there are certainly large numbers of birds around and hopefully, I will be able to report a bit more detail on Lough Neagh later in the year.


Finally, encouraging news from County Fermanagh is that the colony on the RSPB reserve on Lower Lough Erne has increased from c.600 to c.900 pairs.

As always, many thanks to Copeland Bird Observatory, RSPB NI and WWT at Castle Espie for granting permission to ring at the colonies above.